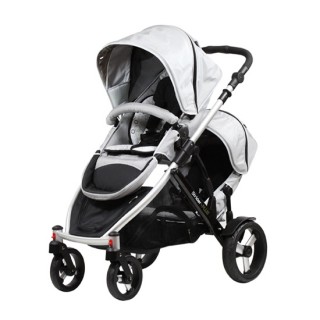 Tandem prams give parents of twins and siblings, a double pram option of how they would like their children to be seated, as well as ease of maneuverability and lifestyle. Many parents choose tandem prams because a wide twin pram doesn’t appeal, with being able to nip about the shops and around town with tandem pram ease, a wide twin pram that may get stuck in doorways and is hard to navigate, is not the double pram of choice for some.

If you are deciding on a tandem pram, you need to make sure you are happy with which way you would like your children sit, side by side in a twin pram, or one child in front of another in the tandem pram style you have chosen. After you have decided this, then it’s a good idea to test out a few tandem prams, as they all vary in size, style and maneuverability.

I chose a tandem style pram for my children, and it worked extremely well when my youngest was a baby. The tandem pram allowed her to sleep soundly in the back whilst my son was kept busy in the front. When my little girl was a toddler, she would happily sit in the front of the tandem pram, whilst my son had a nice big boy rest in the back on the way home from kindergarten. When they got a little older though, we did have many tantrums on who would sit in which seat in the tandem pram, but at this stage it was getting hard to keep them in a pram at all! So with a few food bribes here and there, and trying very hard to teach them to take turns (not easy) the tandem pram was a great choice for me and the family.